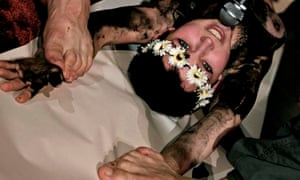 "There's a joke in Belarus, where the head of the electoral committee says to Lukashenko 'There's good news and bad news. The good news is; you're president again. The bad news is; no one voted for you…' " That's about as funny as things get in this very powerful and stirring account of "Europe's last dictatorship", and the heroic struggles of the Belarus Free Theatre to protest against oppression. Using footage that had to be smuggled out of the country amid the constant threat of assault and imprisonment (several members of the group end up in exile abroad), this boasts dramatic images of peaceful protesters being beaten and bustled into armoured trucks for the crime of clapping and smiling in the street. Really. Meanwhile, the BFT win awards for their performances from off-Broadway to the Edinburgh fringe, but long to return to their homeland despite the warnings of their loved ones who fear for their safety. Excerpts of performances from shows such as Being Harold Pinter and Minsk 2011 hint at the visceral power of the group, which the Belarusian authorities apparently view as a threat to national security. No wonder.

INDIEWIRE | September 20, 2013 | Anne Thompson – Sackler Talks Astonishing TIFF Doc 'Dangerous Acts Starring the Unstable Elements of Belarus' I learned a lot of things I did not know in Madeleine Sac